At UbiCast when we welcome new members in the team and they start creating tutorials, they always make the same remark after watching their videos “This is my real voice? Isn’t there a problem with the microphone?”

We all have been there, we watch a video or we listen to an audio recording where we talk and we do not recognize ourselves at all. Know that it’s perfectly normal! Your body does not perceive it in the same way as usual, that’s all.

The sounds external to us are picked up by the ears only, while the sounds coming from the inside are transmitted by the vibration of our bones. So the voice you hear when you speak, well, it’s only you who can hear it. 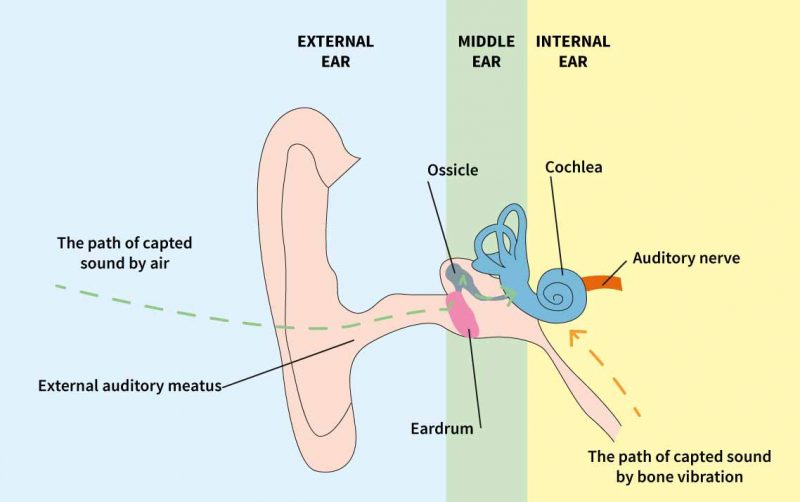 The phenomenon starts from the lungs, the breath then passing through the larynx to vibrate the vocal cords, which generates a sound wave. To hear this voice, the sound wave travels a sacred path in our ear: it rushes into the external auditory canal, then into the vibrating eardrum. The vibrations reach structures called ossicles, which send them to the inner ear where the wave is converted into a nerve signal. The latter is transmitted to the brain by the auditory nerve. (translated from Source : Sciences et Avenir) While if you speak, the sound will come from the breath as described above but also by the vibration of the bones. When you hear your voice on a video or audio recording, the voice is heard only through the eardrum, there is no more transmission by bone vibrations. Moreover, it is interesting to note that the bones transmit mainly the lowest frequencies, so on a recording it appears to us more acute and we do not recognize it whereas it is what the others really perceive.

This explains why some singers put their conque-shaped hands on the ear. They can thus more easily perceive the high and the low frequencies of their own “real” voice, and make sure that they are singing just right.

In addition, it is a bit the same phenomenon as when looking at pictures of us, without recognizing ourselves. We get used to seeing ourselves evolve physically with the reflection of the mirror, so having a new perception can destabilize our brain.

Get used to the sound of your own voice

Let’s move on to the more psychological aspect. The first times we get along we can be destabilized, found our voice really strange. One may wonder if one will be able to pass in front of a camera without trying to control his voice, and lose all natural and spontaneous attitude.

Yet here are some simple tips to go through it without damage:

Let’s go ! Use the WebStudio to record and create videos from your computer, and this while not dreading your voice 🙂

Your Smart Toolbox to Create the Ultimate Video Learning Experience

Our Commitment to the Environment
UbiCast in 1 - 2 - 3 ...
New Feature: Trim Your Videos to the Nearest Millisecond